Zoo tours are great but quite boring considering that animals are usually caged and quite domesticated. In contrast, the animals in the parks are totally wild and roam freely. This keeps you guessing as you can’t tell at what point you will be seeing wildlife. This is one of the things that attracts tourists to Volcanoes National Park, and to this group in particular. They are adventurous and always on the move to discover the different wonders of the park. As such, the hiking experience to see them is enriched like a treasure hunt as it treats you to many sights and sounds you would have missed out on. It could be natural swimming ponds deep inside the park, some critically endangered bird species, foot prints of elephants…. the list goes on.

The group is currently led by a silverback called Agashya who had to overthrow Nyakarima before taking over the throne. The family’s population has grown from 13 to 27 members in a space of 8 years.

If you wish to encounter gorillas in the wild without going through so much trouble, this group is for you. They like to graze in the easily reachable forest zone of the mountain after which they are named, Mountain Sabinyo. In seasons when food is scarce here, they don’t go very far. Rather, they hang around the lower slopes of the bamboo zone. This preference for less bushy settings makes it easy to take their pictures as they go about their normal-wild-lives. The group is headed by Guhonda silverback and has 12 members.

It is believed that no other gorilla group had such a special place in the heart of Dian Fossey than the Titus. This is partly because they shared a lot in common. Like her, this gorilla which is comprised of 8 members went through very many low moments and yes, she witnessed so many of them. For instance, she witnessed how it’s group leader was born amidst excruciating labour pain by his mother. He was called Titus. Fossey was also there when his father, brother and uncle (Digit) were brutally poached. This horrifying incident left the gorilla’s mother and sister very traumatized. Eventually, they found themselves forced to join other families where they were offered security.

In an effort to repopulate his group with the intention of filling up the emptiness that was brought by the death of his father and uncle, Titus fathered 20 babies with the five females in his group and lots from others. By the time of his death in September 2009 (at the age of 35), Titus had been overthrown by his son, Kuryama, the incumbent King of the Titus Monarchy. The group is based on the eastern slopes of the Karisoke volcano, not so far from the grave of their Godmother, Dian Fossey.

Titus’ uncle, Digit, is the famous gorilla that was featured in the Documentary about Diann Fossey; Gorillas in the Mist. More to that, he is one of the main characters featured in “The Gorilla King” a documentary film by BBC that took 2008 by storm.

Every year, Rwanda organises Kwita Izina, a global conservation event in which gorillas are named according their characters. During second edition in 2005, this group was named Amahoro. It’s a word in Kinyarwanda language which means someone or something whose peacefulness is profoundly inspiring. Indeed, the 18 members of this group are true ambassadors of peace. They are very tolerant to tourists and only put up a fight when in fear that they are in danger.

To avoid any trouble with it’s group leader Ubumwe, don’t look directly in his eyes. Like most silverbacks, it makes him feel like you want to challenge his authority. The last gorilla that did this got a beating of a lifetime. He is called Umubano.

Not every good thing that happens once in a lifetime is welcomed. In mountain gorillas, the birth of twins isn’t that exciting to the mother because it means entering into a stressful phase of care giving. In this regard, when a mountain gorilla gives birth to twins, it usually abandons one of the infants. Ironically, a mother in this group of 33 members did otherwise. She has defied odds to mother both of her cheerful twins; Impano and Byishimo.

This is one of the things that makes this group to be one in a million. 10 years ago, the group had one of the biggest populations in Volcanoes National Park, boasting of 42 members. 9 of its defiant members split off to form Susa B group, also known as Karisimbi group.

This group has 13 individuals; one silverback, a blackback, six infants, three adult females. It was formed by Charles, a dominant silverback who was tired of unending fights in Amahoro group. This followed lots of invasions by rival gorillas. Accordingly, Charles persuaded twelve like-minded gorillas to join him in forming a family that believes in other ways of solving problems apart from violence. That’s how the group came to be called Umubano, a word in Kinyarwanda language which means living together in harmony.

Since their split from the Susa A group in 2008, this groups population has grown from 9 to 15. This is thanks to multiple births they have registered. They live in the higher ranges of Mountain Karisimbi-Rwanda’s highest mountain (4,507M). This is one of the things that makes visiting them more rewarding than most gorilla groups. It entails rising towards the highest point in Rwanda from where you can take in views of thousands of majestic hills.

There are two reasons for which this group is named after a Kinyarwanda word which means lucky. For starters, it is one of the only 7 groups in Virunga region that has twins. This is a big deal considering gorillas depend on big numbers for protection.

The other reason, is that no matter the time of the year you visit it, you have a great probability of finding all its 16 members. They have a strong solidarity and always stick together even in the heat of anger. Their preferred location is mountain Sabinyo where they have been roaming freely since their break off from Sabyinyo group and Agashya group some years back.

The group comprises of 23 individuals led by Akarevuro, one of the three dominant silverbacks, the other two are Magumu and Kigoma.

Before migrating and settling in the lower slopes of Mt. Sabyinyo and Mt. Gahinga in 2003, the group used to live in Africa’s oldest National Park, Virunga National Park. Then, it was still led by Kwitonda, an adorable silverback that passed on shortly after clocking 40 years in 2012.

The group is named after Kwitonda as he led his family away from the war torn zones of Congo. As you walk past community land into the park to see this group, kids will cheerfully wave at you while exclaiming “Abba Mzungo”. It means welcome home white friend.0

After being overthrown from heading the Titus group, Titus formed Beetsme group in 2007. For over 5 years, he ruled iron fist and fathered over 20 babies from both within his group and others. One of these babies was Bwenge, an ambitious son who upon clocking 19 years led a revolution that led to the formation of this group.

He was followed by two females from his former group and females from Pablo’s group. Together, they helped him a lay a strong foundation for a small kingdom that now boasts of 11 members. They live in the slopes of Mountain Karisoke. The group has so far lost 6 infants, most of whom were victims of fights with other groups.

Ugenda group Like identical twins, the 27 gorillas in this group have a very striking resemblance. When you look at their major body features from head to toe, you will spend the next one hour trying to tell them apart but without much luck. You will be amazed by the perfection with which God created them. Astonishingly, the ranger guides can tell them apart without necessarily seeing them, but by hearing the tone of their vocalizations and rate of heartbeat per minute. This follows a connection they developed with them since the time of their habituation few years back. Using this prior exposure, they will identify for you the different individuals and share with you their captivating life stories, highlighting their best and worst moments. Ugenda is made of 11 members including 2 silver backs 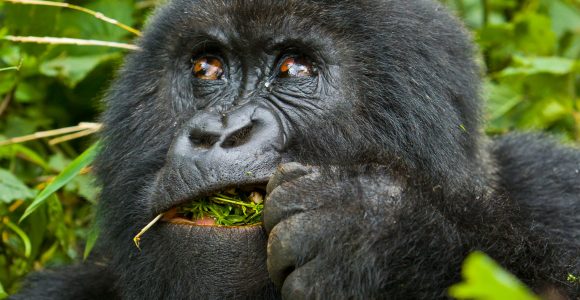 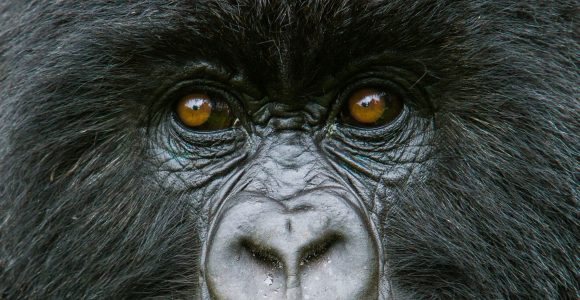 On 17th June, 2020, Rwanda reopened its national parks to tourism with discounted Rwanda gorilla permits after three months of … 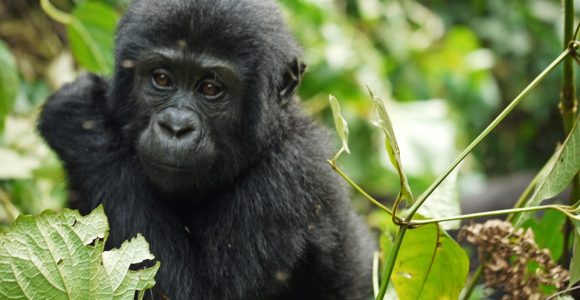 Day 1:  City tour & Transfer to Bwindi impenetrable forest You will be picked from the airport or your hotel … 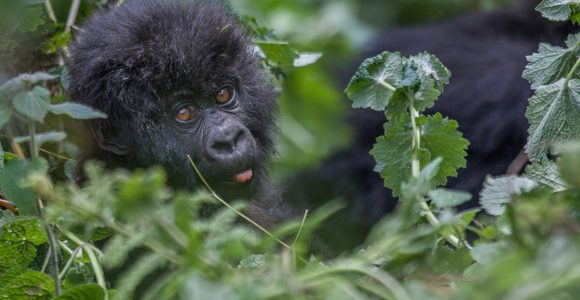 Rwanda Gorilla Trekking takes place at Volcanoes National Park in the northern province. This 3 Days tour leads you there … 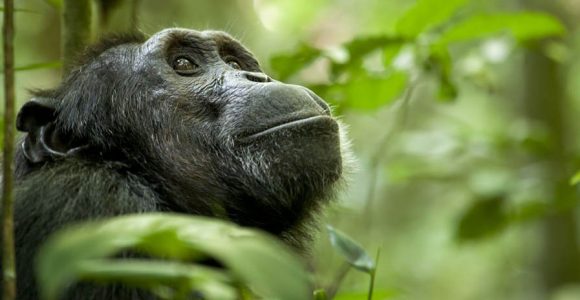 Chimpanzee tracking or Chimpanzee trekking Rwanda takes place in Nyungwe National Park. It is the largest montane forest in Africa … 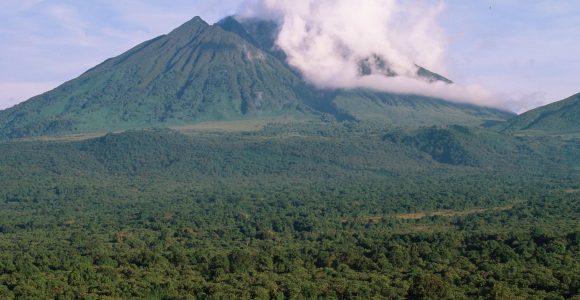 Day 1: Transfer to Musanze / Ruhengeri Following your arrival, you will be picked up from the airport in Kigali … 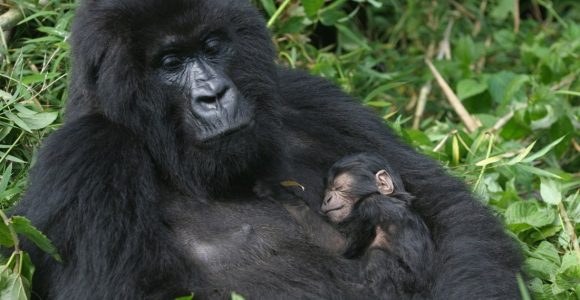 Day 1:City tour& Transfer to Ruhengeri – Volcanoes National Park On arrival, you will be met by our company representative … 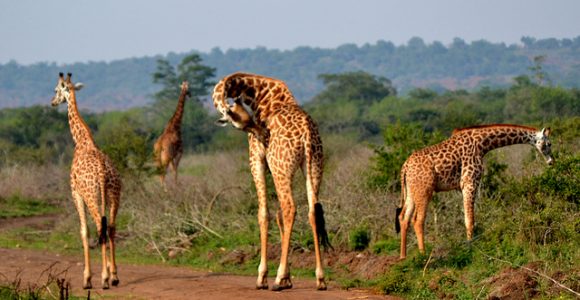 Day 1: Arrive in Kigali. Following your arrival, you will be welcomes by our company representative together with the guide …

Day 1: Arrival and Transfer to Ruhengeri Your driver / guide will be waiting to welcome you at Kigali International … 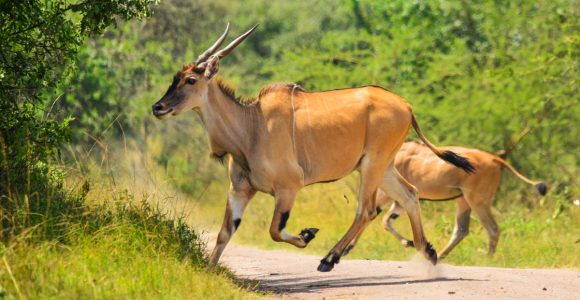 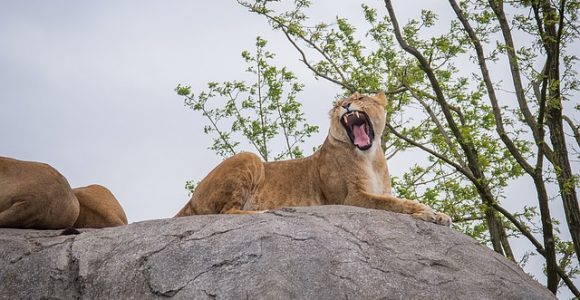